Doing the right thing takes time. What if you don't have it?

Each day you face pressure to make high-quality, high-velocity decisions. Here's how to make sure your ethics are able to keep up. 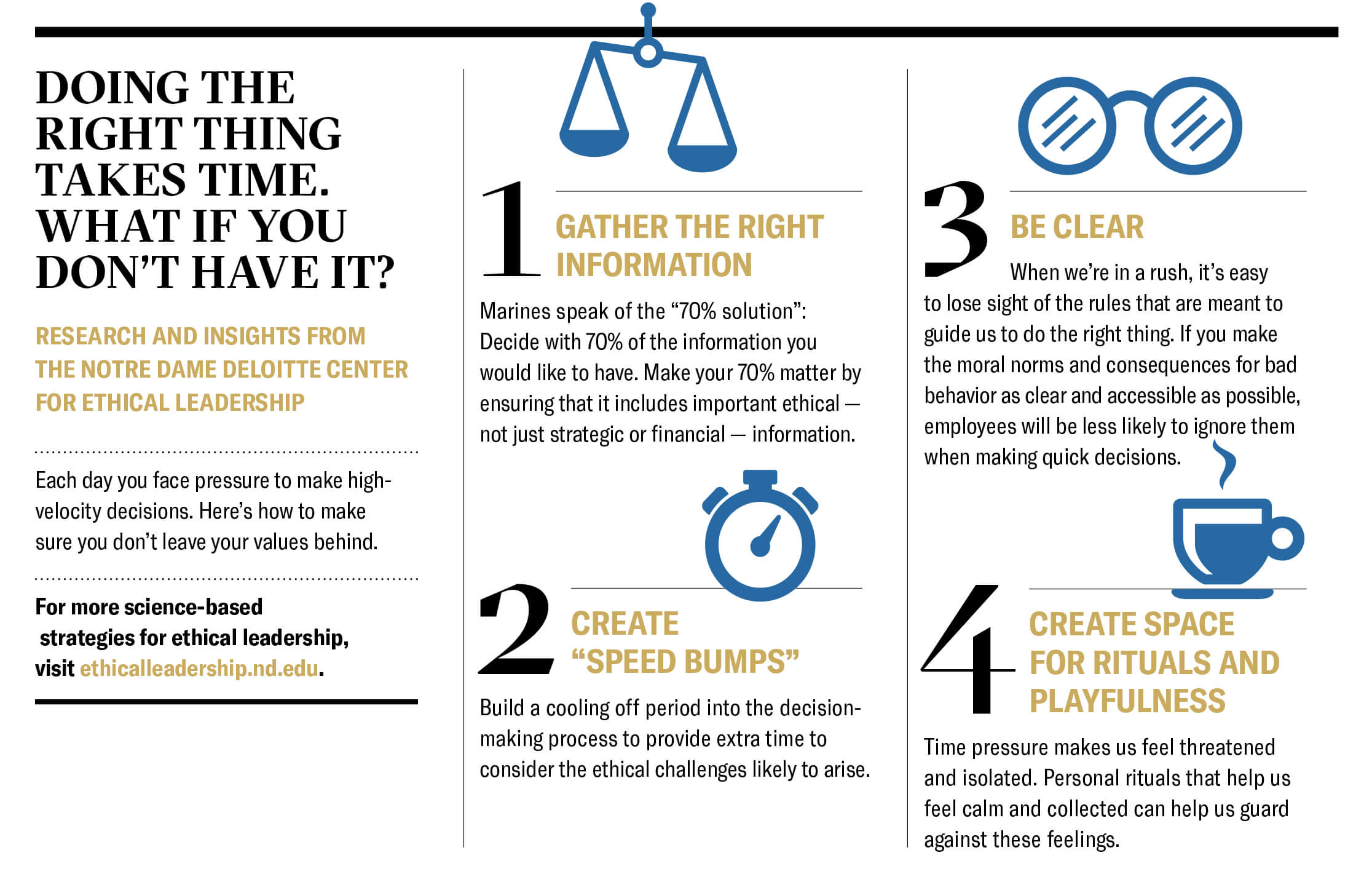 [View Infographic as a PDF]

You will make tens of thousands of decisions today. Some will be about relatively unimportant matters. (One study found, for example, that each day we make over 200 choices about what to eat and drink.) Many leaders try to avoid "decision fatigue" by limiting the number of insignificant choices they make. That's why Steve Jobs wore the same outfit—a black turtleneck and jeans—nearly every day and why Bill Gates has no idea how much a bag of Totino's Pizza Rolls costs (his guess was $22).

But even when they stay laser-focused on only the most important decisions, leaders still feel pressure to speed up their decision-making process in order to seize new opportunities, innovate, and keep pace with the competition. As their organizations become successful and grow in size, the pressure only intensifies. As Amazon CEO Jeff Bezos recently put it, "You have to somehow make high-quality, high-velocity decisions. Easy for start-ups and very challenging for large organizations."

Is a high-velocity decision likely to be an ethical decision? Many researchers have their doubts. They point out that the main obstacle to quick ethical decision-making lies within our own brains.

They explain that the brain has two systems, one fast and the other slow. When we engage in traditional ethical thinking, we use the slow system: we gather as much information as we can, think through possible outcomes, examine the situation objectively, and finally select the right choice after much deliberation.

But the brain’s fast system works differently. It achieves efficiency by leaving out details and using shortcuts and default choices. Rather than working systematically and rationally, this system performs a quick search and matches a current choice with prior information—often with what’s most readily available from past experience. Lab studies have begun to reveal ways that relying on the fast system could take a toll on our ethics.

The problem with our fast system is that it often leads us to act selfishly. Shaul Shalvi, a psychologist at the University of Amsterdam, uses the example of what happens when we receive too much change back from a cashier: “Although the immediate reaction might be to take the extra cash, thinking about it for an extra second will probably lead you to change your mind.” In other words, the fast system takes the lead, and tells us to be self-serving. But the slow system often kicks in—hopefully not too late!—and, realizing the behavior can’t be justified, we correct our first impulse.

So what happens when we can’t (or don’t) take the time for the slow system to kick in? Shalvi reasoned that when we are short on time, we will stick with the unethical, self-interested choice. He and his colleagues tested out this hypothesis by creating a game in which participants rolled a six-sided die underneath a cup. Only the person who rolled the die could see the number displayed during each roll. After rolling several times pariticipants reported their first score in exchange for cash. Higher scores meant more money.

Here’s what they discovered: participants were more likely to lie when they had to move quickly. Those who were given ample time, on the other hand, were more likely to consider their actions fully and tell the truth. In other words, the participants with little time relied on their fast decision-making system and its default setting: act according to self-interest. Those who had ample time could allow their slower, more deliberate decision-making system to take over.

An added finding had to do with the way we justify our unethical decisions. Shalvi and his colleagues found they could limit cheating in a surprising way: by reducing the number of times a person rolled. The instructions said to report the first score, but people who rolled multiple times were able to feel more comfortable lying—after all they had rolled a higher number, just not on their first roll, as the instructions had said. Shalvi and his colleagues summarize their findings this way: “Honesty requires time (and [a] lack of justifications).”

Here’s how to set up your organization for ethical decision-making in our increasingly fast-paced environment.

Know when to slow down—or delegate.

If there’s any chance a decision has important ethical implications, it makes sense to slow down and consider the decision thoroughly. It may take less time than you think. As former UN Chief Ethics Officer Joan Dubinsky recently remarked:

“We're getting better at rolling people back from ‘Resolve, then think’ (‘Fire, Ready, Aim’). Instead, we're moving to ‘Intake. Think. Discuss. Then Resolve.’ It doesn't take a lot longer, but it's more than a 10 second, instinctive response."

Still, slow decision-making may not be in everyone’s wheelhouse. As Cal Newport writes, "A good chief executive is a hard-to-automate decision making machine...to ask a CEO to spend four hours thinking deeply about a single problem is a waste of what makes him or her valuable." Sometimes the best choice a leader can make is to delegate a decision to someone who has the time to engage in contemplation, conversation, and other deliberate processes.

"Most decisions should probably be made with somewhere around 70% of the information you wish you had. If you wait for 90%, in most cases, you’re probably being slow."

Similarly, Marines speak about the “70% solution”: making a decision with 70% of the information you would like to have allows you to move quickly without acting too rashly. Make your 70% count by making sure it includes ethical concerns, not just strategic or financial concerns.

Speed poses a greater problem when we’re facing a strong temptation to act unethically. Do you know what ethical challenges or temptations are likely to arise in your organization or industry? Make sure your employees take extra time to make these decisions by instituting an official cooling off period, a required approval, or standard period of deliberation for important moral decisions. Recent research also points to the power of a simple, silent pause. The researchers behind a study forthcoming in the Journal of Applied Psychology coached negotiators to pause for at least three seconds and sit in silence. This pause helped the negotiators nudge themselves and others away from an overly competitive thinking and toward more constructive win-win thinking. As a result, they were able to were able to "grow the pie" and create more value for themselves and for their counterpart in the negotiation.

When we're in a rush it’s easy to lose sight of the rules, norms, and possible consequences that normally guide us to do the right thing. Make the moral norms and the consequences very clear and accessible. When clear prototypes for ethical decisions come to mind, or when we have practiced ethical decision-making through scenarios and role-playing, we can make the right choice more quickly.

Create space for rituals and playfulness.

Time pressure makes us feel threatened and isolated. We can guard against these feelings by developing and maintaining personal rituals that calm us. A corporate culture that allows time for sleep and exercise and provides space for playfulness and curiosity can also help by reducing stress and anxiety.

One thing is certain about the future: it is going to be faster than the present. The pressure companies already feel to speed up the decision-making process will only intensify as the pace of automation, innovation, and communication increases. Make your ethical decision-making processes future-proof by making sure you understand how speed affects ethical decision making. Be ready to give your ethical decisions the time they need, and be ready to handle the inevitable challenges that arise when we have to make choices quickly. Doing so will make sure you don’t leave your values behind in an effort to keep up with the competition.